Posted on September 11, 2012 by Muriel Salvan Leave a comment

Lately I was focused on understanding the way French companies work, how are taxes paid, and how to best choose companies’ statuses based on this. I wanted to have real figures and understand where does money go when ruling a company.

First, I couldn’t realize how complex it can be before searching by myself, and the first impression I got was: “Nobody knows, the field is too complex and so badly written in the law.”
… And sadly this impression was later confirmed: any expert I consulted on the topic has a different and contradictory information on the state of the law, and a lot of them gave me wrong advices. Always cross-check any information you get with at least 3 or 4 different sources (this post is no exception), and do not rely too much on self-evidences, as they very often prove wrong either.

This being said, here is my view on the topic: this is a very simplified view, but can be used as an overall base to understand the process, and later delve into details and local exceptions to this big picture.
I will quote French words as their meaning can be really precise and important.

Please note that this study has been made during summer 2012. As French law changes very often, it is possible that parts of this post will be outdated soon.

If you happen to find wrong information, please do not hesitate to comment on it, I will be really glad to correct it.

In France, there are 2 kinds of companies: “Entreprises” (handled by physical people), and “Sociétés” (existing as moral persons). People ruling a company are called “Associés”. Usually “Entreprises” comprise just 1 “Associé”, whereas “Sociétés” comprise 1 to an infinite number of them (either physical or moral). Whatever the form and the number of “Associés”, a company can always hire “Salariés” (wage-earning) people to whom you give salaries.

French companies have then 3 different attributes that govern how they will pay taxes:

The following diagram sums the different companies’ statuses and their specific attributes (it is not exhaustive, but gives the main statuses encountered): 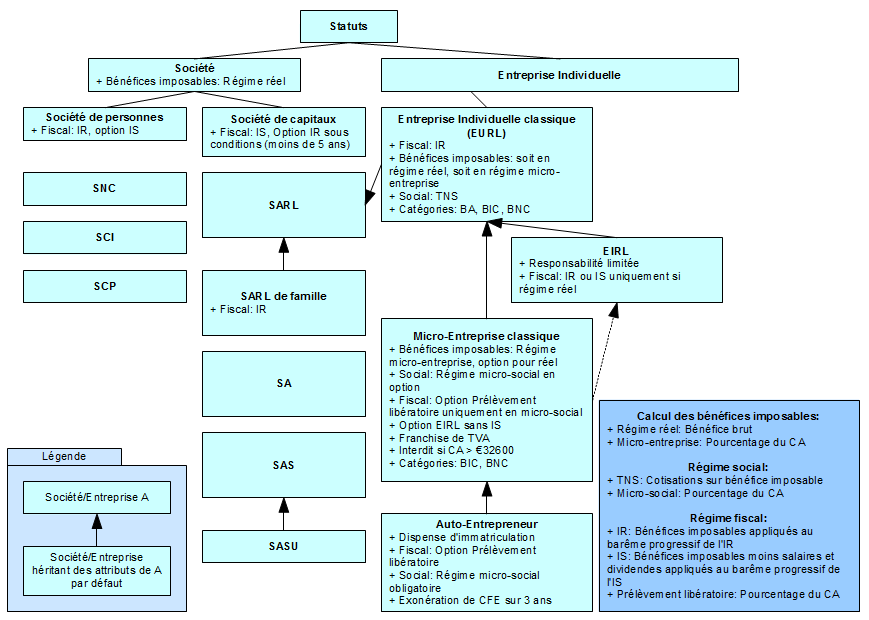 Where does the money go ?

Each year, a French company sums up the money taken from its clients as a “Chiffre d’Affaires” (CA). This money is then shared among the following:

This picture sums up the situation: 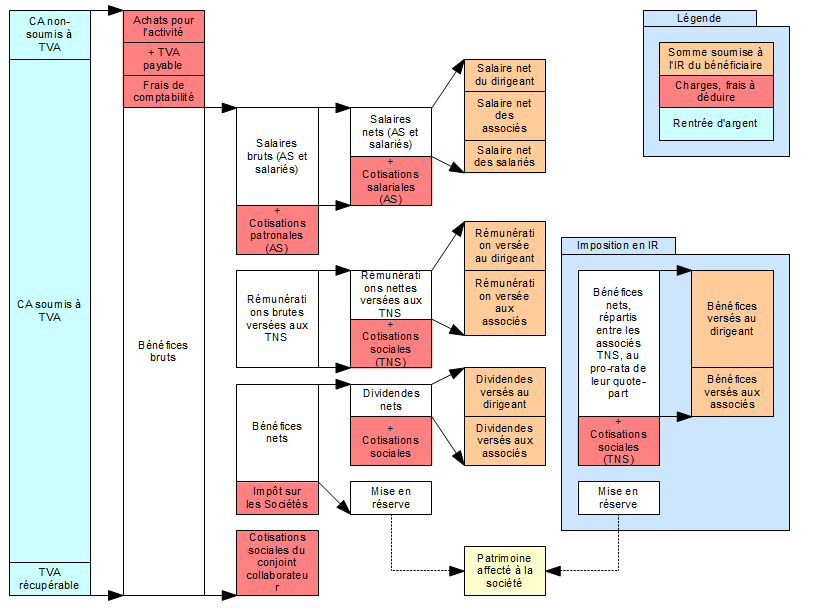 There are simple rules to keep in mind while reading this diagram:

To help you better figure out the costs involved, here are some figures I can broadly give during the year 2012.
Those figures were computed having in mind a “Chiffre d’Affaires” of € 200 000.

Taxes on incomes and societies

As a part of my study, I created a nice spreadsheet that references the main company statuses with their characteristics.

Then, for each (or all) company status(es), you can enter figures (“Chiffre d’Affaires”, number of associates, expenses, salaries…), and the spreadsheet will compute the social contributions, benefits, taxes and incomes for each “Associé”.
It follows the diagram given above and shows all details about social contributions and computations. It can be a bit daunting at first but can prove really useful.

You can use this spreadsheet to compare the different statuses depending on your situation.
Comparatif Statut Entreprises

Here are some links to resources I found very helpful during my study.
However please be aware that you might find wrong, obsolete and contradictory information in a lot of them: you will have to cross-check them to get the real picture.

Hope this will help others making their mind on those really complex statuses.